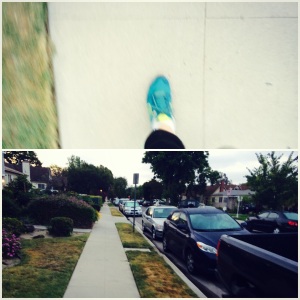 After Chinese take out and a vodka tonic with my mom last night, I felt like crap. I desperately wanted to get my ass on the treadmill, but me + vodka + treadmill = let’s not tempt fate. Instead, I resolved to get up early this morning and go for a run out in the real world before work. We live in a triplex, so I can’t very well be stomping on the treadmill at 5:30 am.

As I tossed and turned trying to get myself to sleep, I imagined that a 5:30 am run was the solution to all of my problems. I’d start the day with some quality alone time and some good music, and I’d emerge feeling energized and ready to tackle the day. Maybe this could become a regular thing. It would sure take the pressure off of the evenings if I could get my workout in at the beginning of the day. Yes! That’s a great plan! 5:30 runs every day from now on!

My alarm went off at 5:30. I wanted to choke it, but you can’t choke an iPhone, apparently. You can only throw it.

At 5:40, I felt guilty because my alarm had awakened the dogs and Catch, and they sure as hell didn’t need to be up so early. It was guilt that dragged my sleepy rear end out of bed and toward the general direction of my sports bra and running shoes.

5 minutes later, I was stretching on our front steps with Tom Petty in my ear. This is gonna be great.

It was great until I got home and realized that I couldn’t just throw myself onto the couch and spend the rest of the day being a vegetable. I had to shower. I had to get ready for work. I had to be a functioning member of society.

I did not feel energized. I felt even more exhausted than when I started. Plus, I’m not used to running on concrete and my hips freaking HURT.

Now that the day is in progress, I regret not turning off my alarm and getting some extra sleep. At least then my eyes wouldn’t feel like sandpaper and I wouldn’t be popping Advil like it’s candy.

I’m thinking the 5:30 am run is going to be the exception rather than the rule. But hey, at least I tried.

Not a Morning Person

4 thoughts on “Maybe Not”